In recent weeks, the Indy Eleven announced its latest pitch for a soccer-specific stadium as part of a $550 million development in Indianapolis after failing to receive legislative support on a funding initiative in 2015 and 2017.

Three weeks before this announcement came out in early 2019, we surveyed 840 central Indiana residents on their opinion regarding using public taxpayer dollars to provide new or additional support for an Indy Eleven Stadium, in addition to Bankers Life Fieldhouse, Lucas Oil Stadium, the Indiana Farmers Coliseum at the Indiana State Fairgrounds, and Victory Field.

Here are three key takeaways from the data:

Only 23% of respondents supported the use of taxpayer funds for a new Indy Eleven stadium. This number significantly lagged behind support for the Coliseum and Victory Field (37%), Bankers Life Fieldhouse (34%), and Lucas Oil Stadium (31%).

When subtracting the percentage of those disapproving from those approving, a new Indy Eleven stadium recorded a -19% favorability rating, with 42% of respondents disapproving. 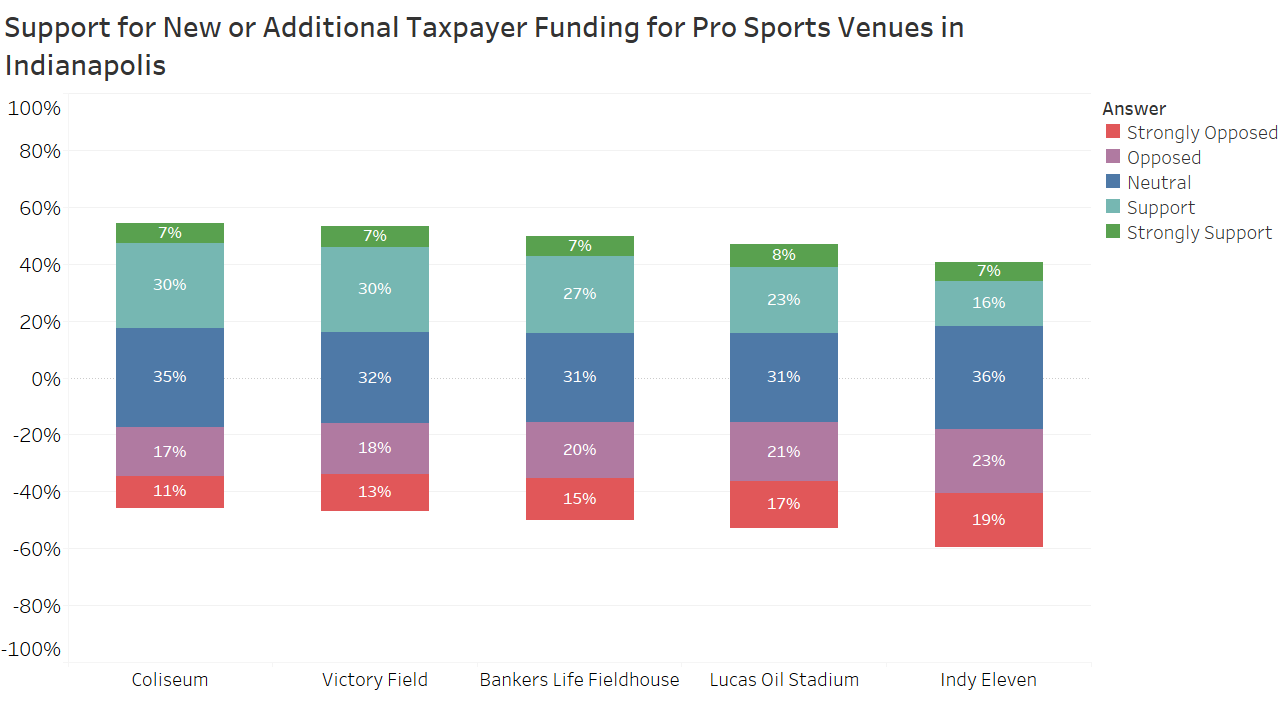 Along political lines, Democrats showed the highest level of support for a soccer stadium at 27%, followed by 26% of Independents and 20% of Republicans. Those identifying as “Other” or “None” registered below 20%.

These numbers mirrored trends in how respondents answered poll questions about men’s professional soccer as a whole. Professional soccer was liked by 36% of Democrats, 33% of Independents, and only 18% of Republicans. Previous studies have found similar trends.

Along generational lines, Millennials clearly showed the strongest support for a soccer stadium, followed distantly by Boomers and Gen X. The support for the stadium followed a similar trend as for the likeability of the team by generational group, as shown in the Table below. Stronger support and interest by Millennials has been found in other national polls in recent years.

The poll results do not bode well for another trip to the legislature to seek taxpayer funds for an $85-$100 million stadium like the team attempted in 2015 and 2017. This time, the Indy Eleven strategy to predominantly shield taxpayers from the burden of funding the $150 million stadium through sales and tourist taxes, but, instead, through tax increment financing (TIF) in a sports development district will play better at the Statehouse. The remaining $400 million project surrounding the stadium to include office space, retail shops, apartments, and a hotel would come from private investment, allowing the Eleven to strategically and wisely position the project as a private-public partnership.

TIF districts are used by cities to pay for infrastructure needed to promote economic development. The district captures the increase in assessed property value and allocates the incremental tax revenue toward the repayment of the bond used to pay for the construction. One of the key advantages to the use of TIF in Indiana is it does not need to be approved by voters at the ballot box in a referendum.

Take a look at the demographic characteristics of the survey respondents.

Where did you grow up? 67% in central Indiana; 33% somewhere else